Biofouling is a natural process occurring at all three phase transitions, i.e. water to hard substrate (barnacles & mussels), air to substrate (lichens) and air to water with its specialised micro-plankton in the surface micro layer.

Biofouling is a natural process occurring at all three phase transitions, i.e. water to hard substrate (barnacles & mussels), air to substrate (lichens) and air to water with its specialised micro-plankton in the surface microlayer.

Electric power plants use huge amounts of water to complete the steam cycle. Steam from the low pressure side of the turbines is condensated in large mainly tubed heat exchangers or condensers. The condensated water is re-used after cleaning / polishing in the steam cycle. This process of condensation uses large quantities of (cooling) water. In general a fossil fuelled power station uses circa 50 m3/s at a thermal discharge (P) of 1200 MWth. Such volumes make it uneconomical to use treated or tap water, so the sources are rivers, lakes and coastal water. But these surface waters contain a large range of biological species such as larvae of crustaceans but also bacteria. The latter can cause slime build-up in heat exchangers leading to, besides reducing the heat exchange capacity, microbial influenced corrosion (MIC). The planktonic larvae of barnacles, mussels, oysters etc. can attach in all parts of the cooling system and form thick mats in conduits and other plant structures. Uncontrolled colonisation by either the micro- or macro-fouling organisms will cause reduced efficiency and, finally, shut down of the plant. But in the current global economy there is increasing pressure for higher efficiency and lower cost of electricity. In addition, because fouling organisms are more difficult to control the longer they remain undisturbed after gaining foothold, mitigation and cleaning of the existing biofouling will be more costly.

In general there are three types of cooling water systems: the offshore and onshore system and the recirculating cooling water system with the help of cooling towers. The offshore intake system comprises a water tunnel which runs out from land, below the seabed, to open in relatively deep water some distance offshore. The openings of the intake are usually close to the seabed to avoid drawing in the warmer surface layers, and may be equipped with some kind of concrete capping arrangement (sometimes known as the velocity cap) to reduce abstraction from the surface layers. Such an arrangement is believed also to reduce fish ingress, by eliminating vertical water currents. Some form of coarse screening is always provided at this point, to prevent the entry of large items such as tree branches and fishing nets which might otherwise obstruct the CW tunnels.

The CW tunnel which conveys the water back to the main site is normally signed to permit a water velocity of around 2.0 – 3.0 m/s, so as to avoid sedimentation. A descending shaft below the intake opening leads to a near-horizontal tunnel, a slight uphill slope being provided to prevent air retention. At the onshore end the tunnel opens into a forebay a large basin open to the atmosphere where the water up wells. Flow into the forebay occurs by gravity and the cooling water is drawn from the forebay chamber by the CW pumps causing a hydraulic gradient from the inlet to the pump pits.

Onshore intakes are often associated with a wharf-type structure, where deep water is found at the water margin. Alternatively, a dredged channel, sheet piled canal or a harbour. can be used to connect offshore waters with the onshore intake. From the intake entrance, water normally collects in a forebay area, in the same manner as the landward end of the offshore intake type. Thereafter, the CW systems of both intake types become comparable. Fine materials are removed by moving screening systems. Here, two types can be distinguished: band screens and drum screens. The cooling water is pumped in the direction of the main condensers and auxiliary heat exchangers. The heated water (ΔT 5 to 10ºC) runs generally on gravity in large conduits to the discharge area. In the past the heated water was mixed immediately but new insight showed that deliberately keeping up of a heated surface layer cause less effects in the receiving aquatic system especially for migrating fish species.

All river and coastal water in cooling water systems will cause rapid settlement and growth by organisms in a standard pattern. Firstly, organic molecules are deposited, followed closely by the attachment of bacteria, especially those which produce slime as a part of their metabolic functioning. The slime layers (xPS = extracellular polymeric substances) improve the habitat for the different bacteria populations living in the xPS layers. They form mushroom like extrusions with small water channels. The xPS layers are a protection shield against oxidative biocides. Nutrients are gathered by the sticky, slimy layer. Inside the protection shield bacteria can grow and multiply. A biofilm is an ecosystem on itself with grazers like amoebae feeding on bacteria. Once the biofilm is established, the colonization of the surfaces by other organisms becomes possible. Both the bacterial slimes and the larger animals or macro invertebrates constitute the fouling community. Clearly, the types of fouling are dependent on the geographical location of the power station and on the temperature, salinity and quality of the water.

Macrofouling is usually thought of as colonising the intake system of direct cooled power stations and it is from the problems caused by the Blue Mussel Mytilus edulis, Sabellaria spp., oysters and barnacles that interest in this subject developed. In non-tidal low salinity waters such as the ‘Noordzee’ canal in The Netherlands the brackish water mussel (Mytilopsis leucophaeata) is found and in freshwater the equivalent is the Zebra Mussel (Dreissena polymorpha). In addition, in North America severe problems have been caused by another bivalve mollusc, the Asiatic Clam (Corbicula spp.). During recent years this species has been found in European rivers, Rhine, Moselle, upper Rhone and the Garonne basin.

Formation sequence of bacterial growth into a biofilm 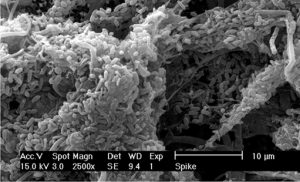 Electron microscope picture of bacteria in a biofilm

However, fouling is not restricted to micro- and macro-fouling, as three other types of problems could be considered in this category. Firstly, there is the material generally known as trash. In front of the intake pits, before rotating screens trash racks are situated. The trash consists of inert debris, seaweed, hydroids reeds, plastic bags and bits of wood. The rotating screens directly in front of the cooling water pumps generally remove most of the smaller trash like free-floating material and living material such as Sea Gooseberries (Pleurobrachia pileus), jellyfish and fish. The latter include those species which form shoals as they migrate in the near shore waters from which the cooling water is withdrawn, such as Sprat (Sprattus sprattus) and Herring (Clupea harengus). Also important are those species drawn into intakes on their migratory movements into and out of estuaries and rivers like the Shad (Alosa spp.), salmonids and eels.

Historically, dosing of Na-hypochlorite (chlorination) at the front of the intake water system is still world wide the method of choice to combat and control biofouling. Intermittent application is most common, because slime formation or microfouling was the primary problem. A new method is Pulse-Chlorination® which uses the behavioural response of the bivalve in a on/off dosing regime. This method proofed to be highly effective in combination with less chlorine use as possible. The search initiated by KEMA for a more sophisticated dosing regime was initiated by the identification and governmental criticism on the formation of chlorination by-products (CBPs). Several of those CBPs are indeed identified in power plant effluents during chlorination, and early toxicity tests suggested that these CBPs might be toxic at low parts per billion concentrations. Although it has not been possible to confirm the toxicity results, these potential environmental and public health implications sparked the first interest in a search for reducing the yearly dosed chlorine load and the search for alternatives to chlorine. 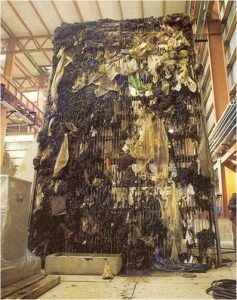 Trash rack, lifted out of the intake, showing severe fouling with plastics

Secondly, in inland stations using cooling towers, there is the problem of scale. This is the deposition of chemicals as a layer on the cooling water side of heat exchangers, which is best considered as a form of fouling because its formation resembles the processes related to those which cause biofilms to develop on the same surfaces. In particular, the quantity and quality of make-up water entering the system, the flow rates of the circulating water and the inlet and outlet temperatures of the condenser water have a strong influence on the rates of scale formation. 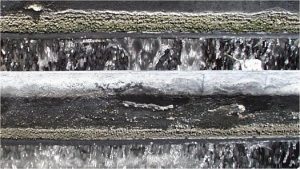 Scaling and biofouling (algae and biofilm) at a cooling tower

Thirdly, there is the problem of silt, deposited from make-up water with a high suspended solids load. This causes trouble when deposited in low flow zones, especially cooling tower ponds, and may enhance slime growth by becoming entrapped in the slime so that deposits in condenser tubes and on cooling tower packing are thicker than would be the case with bacterial slimes on their own. In some instances it is known that silt accumulated so fast that the tower ponds became filled to the rim so the carrying capacity of the closed cooling water circuit was reduced to that of a direct cooled circuit. Similar problems have also overcome newly installed plastics packing as well as from uncontrolled chemical scaling. 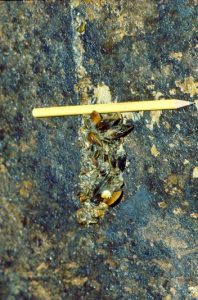 To finish this short introduction of biofouling a picture is given of mussel growth inside a cooling water conduit whereas the first mussels settled at the concrete ridge. This small construction extrusion causes a minor turbulence enabling mussel spat to get holdfast on the concrete. A couple of weeks later the fouling plaque looks like this picture. The pencil shows the flow direction.

Further information can be given on request, see contact details.